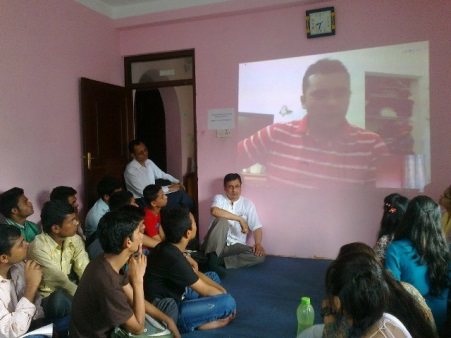 KATHMANDU, NEPAL (10 Oct 2012) Professional Development and Research Center (PDRC) organized a virtual interaction program with Rajendra Senchuri on 22 September 2012 at the PDRC office in Kalanki, Kathmandu. He is a medical technologist and currently residing in the United States. He has also been serving as a secretary of the Nepali-American Society for Oppressed (NASO) community. The program started with the opening remarks from PDRC president Kamala Hemchuri.

The main objective of this meeting was to introduce students with the online education system and experience sharing of Nepali Diaspora with the PDRC students. Another objective of this meeting is to inform the students about how everyone can have access to the world-class education that has so far been available only to privileged circles. Mr. Senchuri concentrated his speech primarily in two subjects: virtual education and affirmative action.

While talking about online education, he explained about the leading universities in the world that are offering online courses for anyone for free of cost. He suggested a few websites and links to the students for choosing a course of their interests. He also emphasized the role of technology that has enabled student’s access to abundant resources. Moreover, this can bridge some of the gaps that prevent developing nations to compete with the developed nations. These opportunities are likely to make life better for themselves, their families, and their community.

He spoke about black people and their struggle for education. He said that education doesn’t only encourage personal development; it also offers the general growth of an entire community. He further said, “In the due course of time, the black people established their own universities and subsequently it helped them to make remarkable progress in the socio-economic and political sphere.

After deliberation from Mr. Senchuri, the floor was opened for question/answer session. Students put their questions about online education, his own struggle, and tips for the students who are hoping to pursue their higher education in the United States.

The program was moderated by PDRC executive director Birendra Bishwakarma. Among the other participants were PDRC president Kamala Hemchuri and Research and Advocacy Officer Dal Bdr B K. Around 40 students from diverse educational backgrounds participated in this virtual meeting. The meeting was conducted in a video conference through Skype.