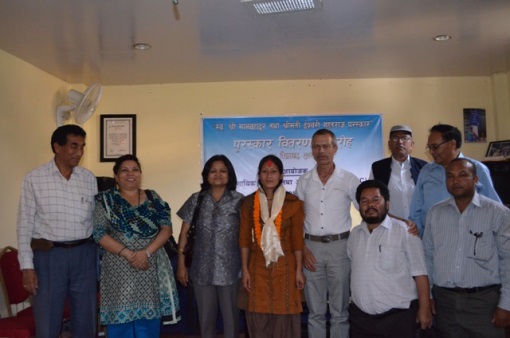 Kathmandu, 11 May 2013- Shova Magrati, a hard-working Dalit girl currently studying a master’s degree in English at Tribhuvan University has been awarded Late Sri Man Bahadur and Srimati Ishwori Gahatraj Award for 2069. The ceremony was held at Kupondol, Lalitpur on 10 May 2013. This is a one-time-only scholarship award established by a senior veterinary scientist, public health expert and Prof. Dr. Drona P. Rasali in loving memory of his maternal grandparents. The purpose of this award is to honor the talent and potential of the next generation of leaders to encourage them for scholarly studies of Dalit issues in the future. Last year, he sponsored the Late Damber Singh and Seti Rasali Scholarship Award for master’s level students in the field of Sociology and Anthropology in memory of his grandparents.

The award consists of a letter of appreciation along with the cash sum of NPR. 10,000. Chief Guest educationist Prof. Dr. Bidhyanath Koirala handed over the award to Shova Magrati. The cash prize was given away by the PDRC president Kamala Hemchuri. The representatives of the Dalit sister organization of major political parties, Dalit NGO leaders and the relatives of Dr. Rasali were present in the ceremony. Shova briefly shared her struggle and also added she will continue working hard to achieve the objective of the award. Prior to her remarks, PDRC executive board member Pompa Sunar highlighted the background and objectives of the award.

Speaking on the program, chief guest Dr. Koirala extended a very special thanks to Dr. Rasali for establishing this award. Recalling the vision of the PDRC founder Birendra Biswakarma, Dr. Koirala highlighted the need for abolishing untouchability and also stressed that the traditional skills of Dalit need to be conserved and modernized. He encouraged others to follow the footsteps of Dr. Rasali saying that this is by far the best way to remember the people who contributed to one’s education in the past.

Om Prakash V K, one of the relatives of Dr. Rasali, emphasized the role played by Late Man Bahadur and Ishwori Gahatraj in providing education to Dr. Rasali. He also highlighted the academic brilliance of Dr. Rasali throughout his academic career. Similarly, Samata Foundation chairperson Padam Sundas appreciated Dr. Rasali’s commitment to his roots. He further added, “One of the tendencies of being too successful is that we are likely to forget where that success came from. Nevertheless, Dr. Rasali has been contributing to the upliftment of this community without being conceited.”

Speaking on the ceremony, Dalit Welfare Organization (DWO) president Chakraman Biswakarma talked about the lack of enthusiasm among Dalit youths.  He also stressed that this tendency very often leaves us behind in our education and career endeavors. Dalit Welfare Association (DWA) president Moti Lal Nepali also said that education should be linked to students’ understanding of the world around them. He further argues that Dalit youths must understand the relationship between education and the consciousness we carry out into the world. Similarly, NNDSWO president Bhakta Biswakarma said that Dr. Rasali is the role model not only for Dalits but for all. FEDO president Durga Sob expressed her commitment to providing further assistance to Shova in her further education.

The ceremony was also filled with an agile speech from Maoist leader Ranendra Baraili for whom the awareness and education should go together.  He further urged students to be more critical and analytical. In her final remarks, PDRC president Kamala Hemchuri pointed out that despite the opportunities available; our youths lack relevant skills and competencies. She further requested the need for directing our collective efforts towards building the capacity of Dalit youths.