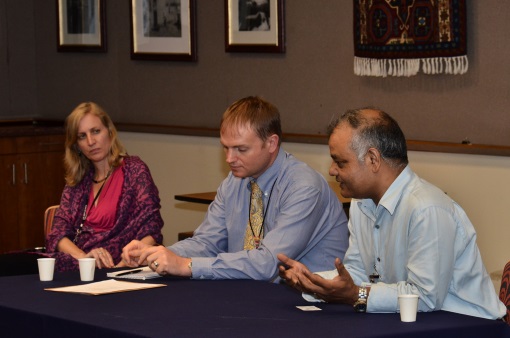 Kathmandu 12 July 2013: PDRC organized an unprecedented meeting with US Embassy officers where it brought 35 participants-including  AI graduates, AI resource persons and PDRC Board members -together to share their convictions on how US Embassy can assist address the pertinent Dalit issues of Nepal and listen to the US Embassy’s past, present and future contribution and commitment to the upliftment of Dalit community.

US Embassy’s Public Affairs officer Ms. Susan Parker-Burns and the Political officer Mr. Scott Stanford hosted the meeting and shed some light on the US government’s understanding of Dalit issue. Claiming social inclusion to be the prominent issue of our times, they expressed their worries towards the tendency of inclusion law not being translated into practice and reality. “There is a link between gender violence and Dalit issue” asserted Mr. Stanford and stated that being a Dalit in Nepal means that you are more likely to be living with poor health conditions and educational deprivation.

Since 1992, the US Government has provided scholarships to hundreds of Dalit Students, 50% of them are women and now they have become leaders” Mr.Standford added. Ms. Parker informed that since last 5 years’ US have invested in health, education, and the environment with special focus to Dalit and marginalized community in Nepal. Likewise, she emphasized that the US Embassy has always been considerate about the competent candidates from Dalit, women and other marginalized communities in its hiring process.

Distinguished scholar Hira Bishwokarma acknowledged the US Embassy for contributing to the education sector of Nepal for decades through the BELE project that lasted for quite a few years. “However US aids need to retarget the aid package” he argued, “because the aid is not reaching to the community that really needs it”. He explained that general reduction in poverty level does not ring as good news for the Dalit community because the data shows that the caste-based poverty or the gap between the haves and have- nots have been widening.  He regretted that Dalit communities have always been the vote banks for the political leaders; that Dalits are easier to be lured and incited to take part in the revolution and movements but they have always lagged behind in ripping the benefit of the change movements. He invoked US Embassy to take a bold step in securing the democratic and human rights of the Dalit community in Nepal because “Dalits have always fought for and have been killed for democracy and peace restoration in Nepal” he confirmed.

Likewise, AI Discourse team Leader Dr. Tara Lal Shrestha expressed his concerns over lack of properly documented history and systematic research of Dalit Community in Nepal and PDRC Board members Bhim Bahadur BK and Yadhuni Das pointed at the void of leadership in Dalit Movement and appealed US Embassy to be more inclusive in its future projects. AI Discourse graduates Suraj Sharma and Girisha Upadhyay suggested the US embassy focus remote districts for its aid and take the campaigns for child rights and human rights together with its education campaigns. PDRC’s Capacity Building Advisor Blair Henry urged the US embassy to take the school dropout rates seriously and help more students achieve higher education.

Embassy’s Public Affairs officer Ms. Parker thanked PDRC’s Acting Executive Director Rup Sunar for taking a lead to conceptualize and organize this type of meeting which can be a milestone to bridge the communication gap between development agencies and the beneficiary groups. PDRC president Kamala Hemchuri was also present in the meeting. The meeting was followed by the US embassy’s resource center visiting.