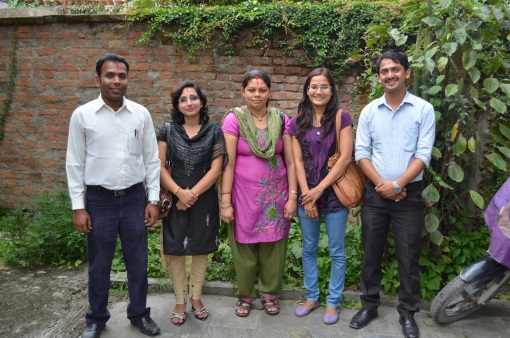 Kathmandu- August 14, 2013- 5 students from TU received a Research grant worth Rs 100,000 in order to complete their master’s Thesis in Dalit issue in a formal ceremony. The chief guest and keynote speaker of the grant distribution program was senior social scientist Dr. Chaitanya Subba who congratulated the research grant awardees and shed light on the concept of social democracy and Dalit’s space and role in it.

With an aim of enhancing communication, research and documentation skills of young scholars and with the motive of encouraging more rigorous research on Dalit issues, the aforementioned research grant is being distributed to 5 eligible applicants from Dalit and non-Dalit community. The research grant awardees are Bikal Kumar BK ( Kailali), Shyam Sundar Ram (Siraha), Suraj Sharma (Kailali), Bineeta BK ( Gorkha) Rama Panthi (Argakhachi) who will receive Rs.20, 000 each for the period of 4 months. They were the participants of Academic and Intellectual Discourse on Dalit (AI Discourse) conducted by PDRC.

The award distribution function was held at Martin Choutari on 14th August, where the thought-provoking presentation on ‘social democracy and Dalit’ by Dr. Chaitanya Subba (Former member of National Planning commission and member of the Presidium Board of Socialist Democratic Party) was followed by an informed and rigorous interaction among the participants- that comprised of representatives from the organizations working for Dalit, AI graduates, students, and other intellectual individuals.

Since socialist democracy bolsters upon the gradual and symbiotic transformation of the society rather than the rupture one, Dr. Subba claimed this ideological system to be the most compatible one in our context. According to Dr.Subba, Freedom, equality and solidarity are three key core values of socialist democracy.“The concept of freedom should be understood in the relative term” stated Dr.Subba arguing that real freedom means freedom from hunger, fear and oppression-real essence of freedom being in equal distribution of the same. Likewise, he urged that only the practice of the fair distribution of resources and means of production would herald genuine equality in the country.

He charged the blame for the miserable lives of the Dalit community and their lowest-rank position in every indicator of development to the centuries-long asymmetrical power relations among different caste and class groups of Nepal. He insisted on adopting the policy of welfare state like that of Scandevinian countries and emulating the affirmative actions taken by America to lessen the cost of Racism in order to uplift the living condition of the Dalit population in Nepal.

In a closing remark, PDRC president Kamala Hemchuri confirmed that the research grant is being distributed to fill the void of proper research on Dalit issue in Nepal and to make the young scholar more aware of the dismal life-standard of Dalit community. She also pledged to regularly monitor the grant so as to ensure its wise use and to continue the organization’s campaign for informing, educating and engaging youths from Dalit and other marginalized communities.