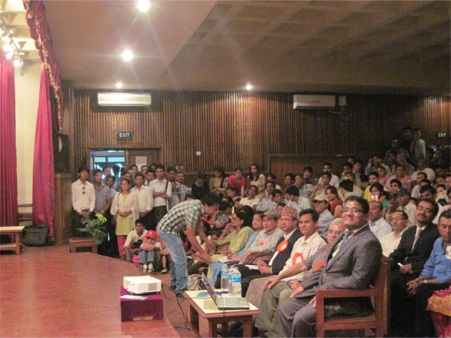 On the auspicious occasion of its 6th anniversary, Professional Development and Research Centre (PDRC) organized a grand celebration on 17 July, 2011 at Nepal Tourism Board (NTB). This year’s anniversary was celebrated with the slogan “Quality higher education for opportunity and change.” The prominent leaders of political parties, pioneers of the civil society organization, and students with their guardian were present in the program. Among the speakers, Dr. Kedar Bhakta Mathema, former vice chancellor of Tribhuvan University addressed the audience as a key note speaker. Citing the historical anecdotes, he urged students to develop their critical faculty of mind so that they can form their own judgement and independent thinking.

PDRC students also performed couple of group dances to entertain the audience. PDRC executive director Birendra Biswakarma and executive board member Danee Luhar did a brief presentation about PDRC and its activities. The presentation highlighted the major accomplishments of PDRC and everyone present in the meeting appreciated it wholeheartedly.

Around 400 participants were present in the celebration and PDRC would like to thank everyone who showed up there to make this event a grand success. The program was run by program manager Rup Sunar.