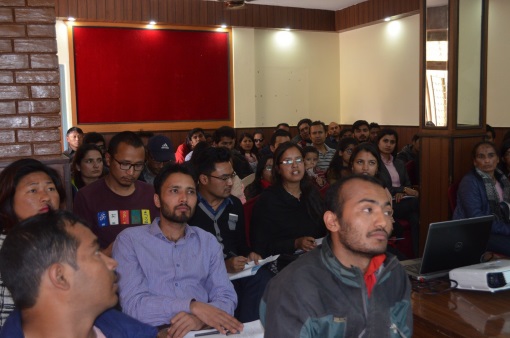 March 30, 2018, Kathmandu – PDRC together with Australia Awards held an information seminar on the Australia Awards Scholarships at Hotel Hardik in Kathmandu. Australia Awards are prestigious international Scholarships and Fellowships funded by the Australian Government. They offer the next generation of global leaders an opportunity to undertake study, research and professional development in Australia. Altogether 60 prospective applicants representing Dalit communities and people with disabilities took part in this seminar. The attendees comprised students, researchers, and professionals from the private, development and government sector.

The information seminar was conducted in two different halls simultaneously. A ground floor hall was specifically allocated for the people with disabilities and Mr. Gaurav Katwal, the Country Program Manager for Scope Global, the agency that manages the Australia Awards in South and West Asia, took the charge of the session in the very hall. Meanwhile, the program officer Mr. Khyam Bahadur B.K. conducted another session separately.

The programs were kicked off with a brief introduction session, especially the background of the Australia Awards and its benefits for the Nepalese students in particular. It was further followed by the minimum requirements and eligibility criteria that one has to meet in order to apply for this program. The last segment was about application procedure which was followed by a question-answer session. The participants had multiple queries regarding IELTS, provisions for reservation and age limit. At the end of a program led by Mr. B.K., Executive Director of PDRC Mr. Birendra Bishwokarma talked about the need for drive and hard work for the attainment of set goals.

PDRC has been coordinating this informative seminar for Dalit applicants for the last four years. The sheer involvement and enthusiasm of participants clearly depicted the importance of International Awards in Nepalese society.