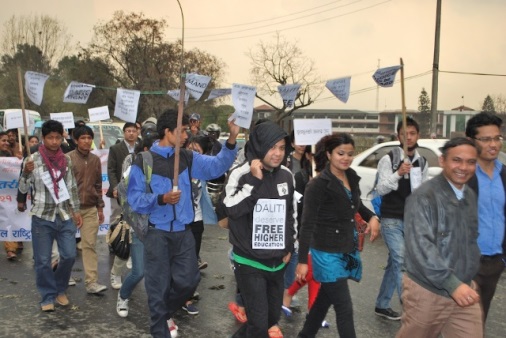 (KATHMANDU, NEPAL 22 March 2013): Hundreds of people representing various national and international organizations rallied to the street to mark the 48thInternational Day for the Elimination for Racial Discrimination. Coordinated by the National Dalit Commission in collaboration with scores of Dalit civil society organizations, this year’s theme was “The basis of ending racial discrimination and untouchability is granting proportional privilege with special rights of Dalits in the new constitution.”

The rally began at 11:00 am with enthusiastic protesters marching in the rain from Bhrikutimandap to Rastriya Nach Ghar Jamal. The formal program at Jamal commenced with the welcome remarks from NNDSWO National President Bhakta Bishwakarma and was followed by the national anthem and one minute silence to commemorate the martyrs from the Dalit community. Amongst the participants were representatives of political parties and senior civil society leaders. Padam Singh Bishwakarma, an original leader of the Dalit movement and living legend, chaired the program.

The negligence of political parties and the government has united us to redouble our efforts to fight for our cause” said Gajadhar Sunar, DNF President. He continued emphasizing that in order to overcome caste discrimination and untouchability, a proper policy should be formulated and supported by the implementation guarantee.

CPN Maoist leader Ram Narayan Bidari noted that “discrimination faced by Dalit community is pernicious.” He called upon political parties, civil society organizations, media, private sectors and all individuals to work together against caste-based discrimination and untouchability whenever it occurs.

Similarly, youth entrepreneur Anil Gajmer Bishwakarma opined that we should take pride in our identity as Dalit. He further elaborated, “The culture of hiding caste must be wiped out.” He further promised to provide support of Rs. 50, 00,000.00 for construction of a temple provided the government supplies to land. He further highlighted the need for millions of people coming to the street in protest of untouchability on 21 March every year.

In his concluding remarks, the chief guest Padam Singh Bishwakarma suggested to give up the culture of silence. He called everyone to be united and determined to discard the caste system from Nepal. The program was concluded by the NDC president Sushila Sirpaili.

PDRC student Smita Nepali recited her much appreciated poem about the miserable lives led by Dalit women and it earned generous applause from the audiences. PDRC would like to thank students, guardians and other well-wishers who came out to support this very worthy cause.